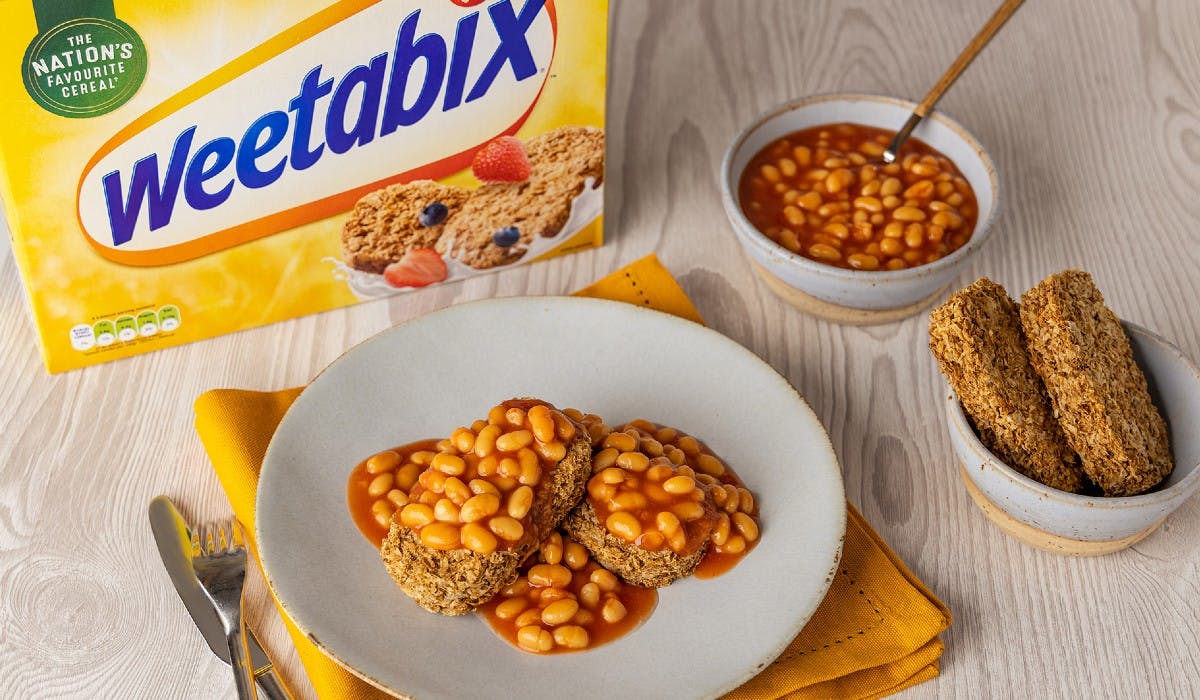 There are many ways to go viral on Twitter: start a war about chicken burgers, play up a law-suit with a competing supermarket, reply to an angry tweet by Piers Morgan, or become a particularly divisive president of the United States.

But in February, Weetabix caused mass outrage on the social media platform by recommending people eat baked beans on its wheat-based breakfast biscuits instead of toast. A viral hit, the tongue-in-cheek tweet provoked mocking replies from brands including Specsavers, Ford UK and the NHS.

According to head of brand Gareth Turner, such work has come as a result of the business consciously creating a culture of bold thinking, setting up “brave spaces” for its employees to talk through “any hare-brained idea” they might have with a member of the leadership team.

Weetabix has also adopted a “yes, and” mantra instead of saying “no” to new ideas, Turned said, which drives the marketing team to look for the positives in any pitch, emboldening them to take chances.

“We’ve made brave work happen by trying to create an environment where it feels less brave and less bold,” Turner said yesterday (9 June) during the Festival of Marketing: Fast Forward.

“If we put a tweet out about beans on Weetabix, what’s the worst that can happen? It’s just marketing, it’s not world peace we’re talking about here. It’s a bit of fun.”

Turner’s long-term growth plan for the brand can be broken down into just three elements, he said, all of which focus on making things easy for the consumer. Weetabix needs to be easy to think of, easy to buy, and easy to eat.

Innovating its communication strategy comes as part of becoming easier to think of, he continued. On top of infamous beans tweet, Weetabix has adopted a strategy of reacting to important British events with a humorous tone of voice, in a bid to stay “relevant” with consumers.

For example, the brand used online media channels to react to the reopening of hairdressers post-lockdown and, in 2019, the appointment of Boris Johnson as Prime Minister.

In combination with high frequency television communications, that strategy has driven an increase in spontaneous brand awareness of 40% over the last year, Turner claimed.

Some of the less glamorous stuff – in-store activation, the consumer prizes, the product and packaging innovation – are the things that excite me the most.

The new tone of voice was created together with Weetabix’s long-standing creative agency partner, BBH London. Strategy director Emily Rule added the brand will be using that new tone of voice even more in future, having noticed consumers expect to see a “word and a wink” from Weetabix when something of importance is happening in British life.

“We think this tone is a beautiful bridge into more culturally driven moments going forward and something of a secret weapon for the brand in driving long-term brand growth,” she said.

“This has given us a massive opportunity to create that extra mental availability that’s so important in driving up the spontaneous awareness that will help us over the long term, drive up penetration and then obviously increase consumption frequency.

“So watch this space for more unexpected and playful moments of Weetabix talking to you when you least expect it.”

Come for the project, stay for the brand

However, when it comes to innovation – be it communications or product –  Turner is clear Weetabix will only ever innovate in a way that makes sense to the brand.

Turner’s overall ambition with innovation is to have consumers “come for the project, but stay for the brand”, something he believes can only be done if the brand is “consistent” to its heritage and long-term credentials.

In 2014, the brand launched Weetabix On the Go, a breakfast drink that offers the same nutrition as two of its biscuits with semi-skimmed milk. The product has become the UK’s number one breakfast drink and this year launched a Caffe Latte flavour.

If we put a tweet out about beans on Weetabix, what’s the worst that can happen? It’s just marketing, it’s not world peace we’re talking about here. It’s a bit of fun.

More recently, in March this year the brand launched Weetabix Melts, a breakfast cereal with a chocolate centre. Again, the product is similar on a nutritional level to the standard Weetabix biscuits.

“We did a full need state mapping 18 months ago now,” said Turner, explaining the process behind the new product innovation.

“Weetabix is in half of UK households so it’s not like we’re shy of penetration, but [Melts] just brings a bit of excitement to our product. It brings a slightly different group with a slightly younger audience, perhaps slightly more family oriented.”

Turner added that Weetabix has a “full pipeline” of product innovation in store.

On top of that, the brand has also been innovating in the way it activates stores, and in April struck a promotional deal with the football associations of each country in the British Isles, including Ireland. The partnership offered consumers the opportunity to win prizes, including the chance to win a training session with the management of the winner’s national football team.

“Some of the slightly less glamorous stuff – in-store activation, the consumer prizes, the product and packaging innovation – are the things that excite me the most,” Turner said.

“I think they will really transform our commercial performance and take us on to the next level.”