Consumer confidence continues to lift as people respond positively to news of a rebound for the economy during the second half of the year, but new variants and inflation are still cause for concern.

Consumer confidence is “moving in the right direction” but concerns over new Covid variants, rising inflation and debt are having an impact on people’s outlook, according to the latest GfK Consumer Confidence Index.

Overall, confidence edged up by one point in April, with the index score standing at -15, as consumers take a more guarded view of the future.

People’s outlook of the general economic situation over the next 12 months increased by six points to -11, a vast improvement compared to February when it stood at -30.

And while there has been a one-point slip in the major purchase sub-measure to -12, consumers have indicated they are more likely to make big ticket purchases than they were in January, when the figure stood at -24. Both of which suggest consumers are feeling more optimistic. 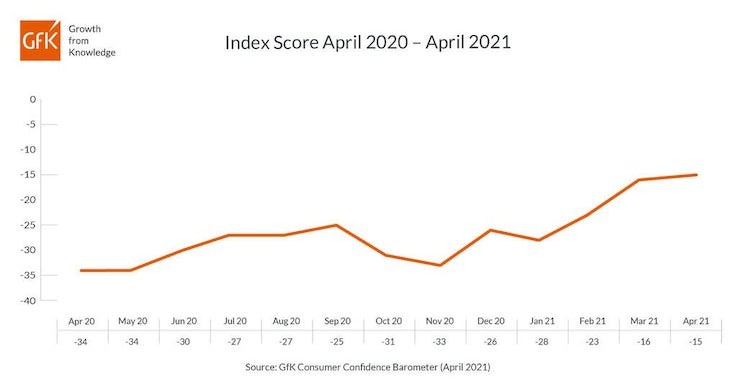 However, there remains a big gap between how people see the general economic situation over the past year (up two points to -58), compared to the next 12 months.

People’s view of their personal finances over the coming year remains strong at 10. Although there is no improvement compared to March, this is significantly higher that the -14 recorded in April last year.

Looking back over the past 12 months, the index measuring people’s personal finances is showing a one-point decline to -3.

Meanwhile, the savings index is up one point to 22 in April, a 17-point increase compared to last year. 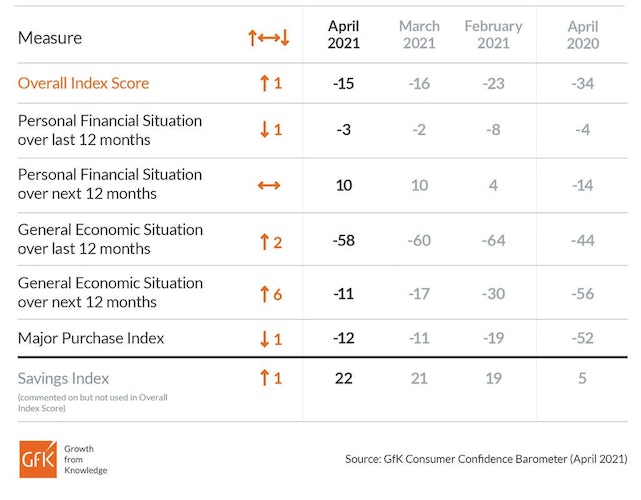 “On balance, we are moving in the right direction and people have shown they will respond very positively to any good news by opening their wallets and splashing the cash in preparation for the Great British staycation.”

The overall index score has increased by 13 points since January, which Staton says is encouraging, but the pandemic has severely impacted household finances so concerns over new variants, rising inflation and the debt overhang will continue to impact people’s confidence.

The biggest issue now, he says, is the “huge gap” between how consumers feel about the economy in the future (-11 in April) and how they see the economy over the past 12 months (-58 in April). But he believes this gap will diminish over time and “we’ll quickly see better overall consumer confidence scores as a result”.