Consumer confidence has dropped due to concerns about rising tax, food and fuel prices, while the end of the furlough scheme means consumers are “slamming on the breaks” in anticipation of economic hardships.

Rising costs of bills and the end of the furlough scheme has consumers “losing their nerve” and anticipating a potential “cost-of-living crisis”, according to the latest GfK Consumer Confidence Index.

The overall index has dropped five points to -12 this month from -8 in August, with all sub-measures dropping in a single month, a rare occurrence.

The plunge is clearly not “welcome news”, says GfK client strategy director Joe Staton, as marketers target the run-up to Christmas for a shot in the arm to sales targets.

“We don’t often see all sub-measures dropping in a single month but that’s exactly what September is serving up. The biggest fall is in how people see the general economy in the coming 12 months,” Staton tells Marketing Week. 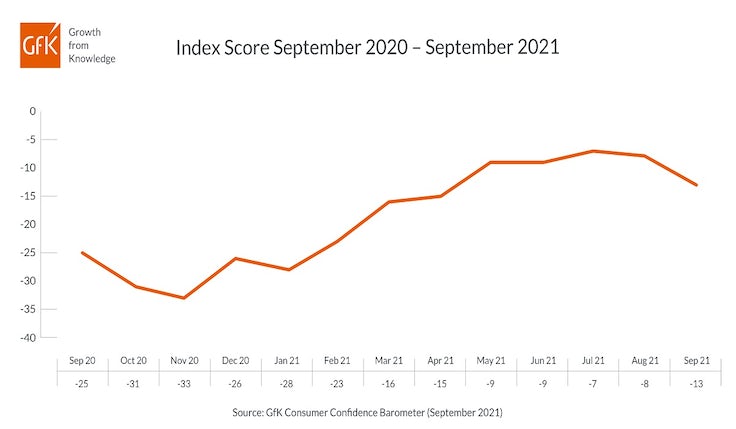 Confidence in the economy over the next 12 months is down month to month from -6 to -16.

While confidence in the economy over the past 12 months is also down from -42 to -43 but is an improvement from September last year when confidence was at -61.

The downward trend continues to be seen in consumers’ personal financial situations, with confidence dipping in the last 12 months from zero to -4, while the financial outlook over the next 12 months is down from 11 to 5.

Coupling the forward-looking outlooks for the general economy (-6 to -16) and consumer economic situations (11 to 5), Staton notes the future-looking measures show “consumers are losing their nerve” and this is a “worrying” revelation given how the consumer mood has improved throughout 2021. 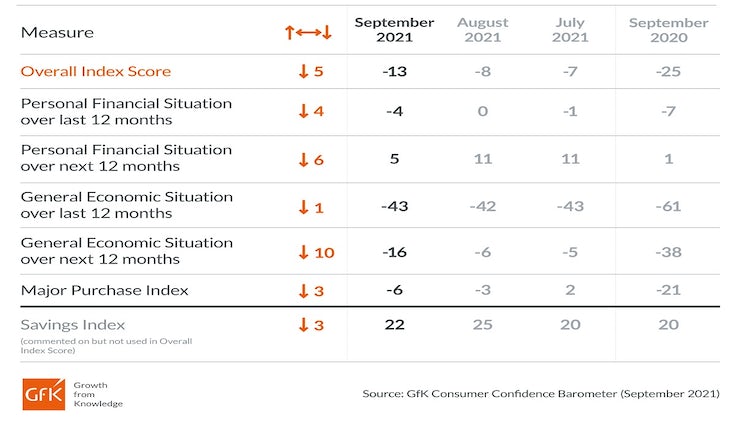 Last month marketers saw reasons to be cheerful as overall confidence was stabilising at -8, which in comparison to the score of -27 for same period a year ago was a marked improvement. In August, GfK reported consumer confidence had risen higher than pre-pandemic levels.

Meanwhile, the major purchase index for September has dropped from -3 last month to -6, which is a “depressing” finding for retailers that have been hit hard by the pandemic, and are looking to make up for lost ground through the key holiday period.

“All measures have declined this month and consumers are clearly worrying about their personal financial situation and the wider economic prospects for the year ahead,” says Staton.

He adds: “When consumer confidence drops, shoppers tend to spend less and this dampens the overall economic prospects for the UK. This really is an unwelcome picture going into 2022 and beyond.”