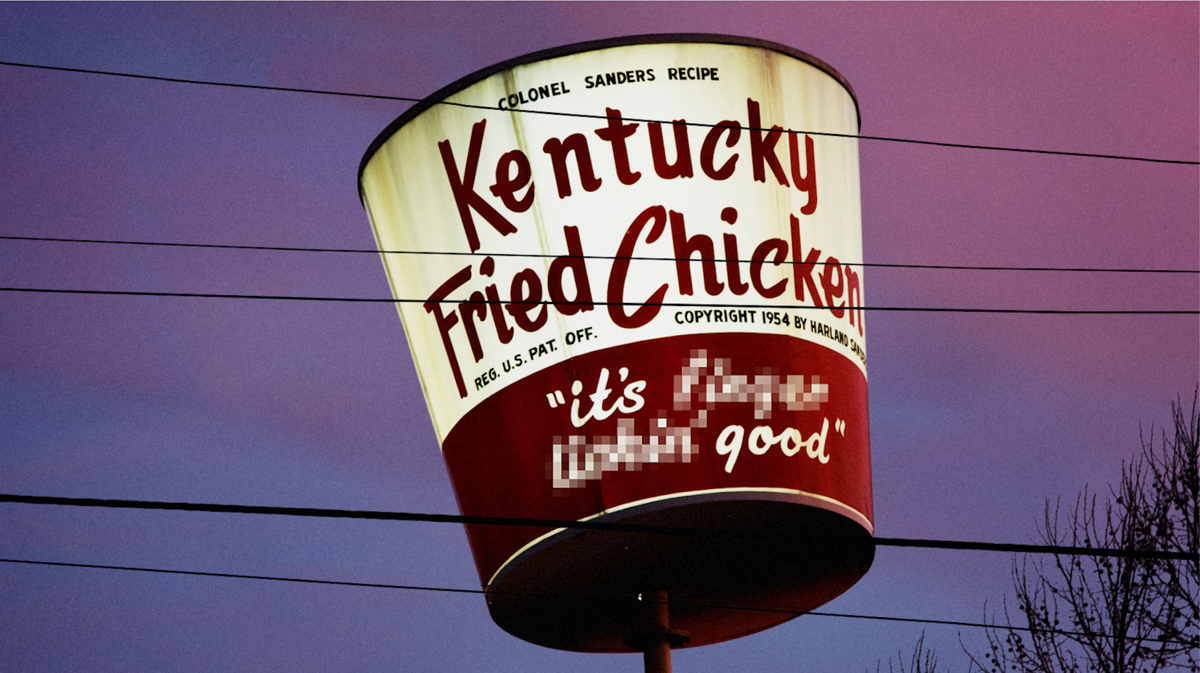 KFC is temporarily dropping the ‘It’s finger lickin’ good’ slogan it has used in its advertising for 64 years and launching its first global campaign in response to the coronavirus pandemic.

A campaign launching today (24 August), created by agency Mother, shows various images of KFC– including an outdoor ad and a number of shots of its infamous bucket of chicken – with the ‘finger lickin’’ part of its slogan pixelated out. It ends with the line: “That thing we always say? Ignore it. For now.”

The campaign will run across TV, press, social media and digital. Outdoor ads will feature KFC buckets with disclaimers, saying things like: “Lick fingers at own risk.”

KFC UK and Ireland’s head of retail and advertising, Kate Hall, tells Marketing Week: “We’ve been using that slogan for over 64 years and it’s arguably one of the most famous in the world – for a reason, we know our guests always lick the crumbs off their fingers because the chicken is so delicious.

“This year has thrown everyone – all brands – and we took a bit of a global stance that actually right now our slogan is probably the most inappropriate slogan out there, so we need to stop saying it.”

The decision to both drop the slogan and run a global campaign was prompted by the insight that encouraging finger licking was “inappriopriate” in the middle of a pandemic.

KFC: Marketing is an ‘exercise in ruthless prioritisation’ during Covid-19

KFC and its owner Yum! Brands usually allows markets to run their own marketing to ensure advertising is relevant and based on local insights. However, KFC found it was getting the same insights from all its markets, prompting its first global campaign.

Hall says: “For the first time ever across all markets we’ve got the same insight because of the global pandemic and we saw that as an opportunity to make some global work.”

She adds: “We joke it has taken a global pandemic for us to really work together. I was expecting it to be tough and to disagree on certain things, but credit to the creative idea from Mother, it’s just a no-brainer and it’s relevant in every market.”

We’ve used it as an opportunity to steal share of voice when everyone else has been quite quiet.

As is becoming the norm with KFC’s marketing, the brand has tackled the issue head on. Rather than simply dropping the slogan and hoping no one notices, it has made the decision the focus point of the campaign.

“KFC around the globe is really bold when it comes to marketing,” says Mother’s executive creative director Hermeti Balarin. “We zeroed in on the tagline as the thing we could have most fun with, be most distinctive, and create the biggest buzz and be super relevant around the world – but at the same time put a little smile on people’s faces.”

The second phase of the campaign will see KFC hunt for a temporary replacement for its slogan. The brand does not know how long it will need to drop finger lickin’ for, but is hoping to drive engagement by introducing a replacement using influencers.

KFC has continued to advertise during the pandemic despite the closure of all its restaurants in the UK during full lockdown. Hall says that despite this, ensuring the brand is front of mind has remained critical, meaning that while it is running promotions and deals, brand building remains key.

Its last campaign, marking the reopening of its restaurants, saw results that Hall describes as “pleasantly surprising” with anecdotal responses on social media showing it struck the right tone.

“While we are offering people sales and promotions and good deals, we want to make sure our brand is front of mind. To be spending on brand building right now is bold and brave, but it is absolutely what we’ve always done and we always see the results come in,” says Hall.

She believes that focus is paying off, claiming the brand has “never been stronger”. KFC has used the pandemic as an opportunity to steal share of voice when many other brands pulled back on spend. McDonald’s, for example, slashed spend by 97% to just £1.3m during the worst of the pandemic in the UK.

“Every opportunity we have had to talk about something, we have been there,” says Hall. “Whether that is putting our managing director on BBC Breakfast talking on behalf of the industry, or reopening. Then from a brand point of view, whether it be the comeback campaign or Instagram activity ‘KFC Clash’, we’ve used it as an opportunity to steal share of voice when everyone else has been quite quiet.

“That has been really authentic to the brand. We are not just trying to make up stories, we are just shining a light on what people are saying on Twitter or doing anywhere. Being a bit more entertaining when people have needed a bit more entertainment.”