Consumer confidence remains stable – and significantly healthier than this time last year – as shoppers ramp up plans to save with a view to the future.

UK consumers are increasingly confident in the prospects of their personal finances, although their focus is shifting from spending to saving, according to the latest GfK Consumer Confidence Index.

Against a backdrop of rising house prices and cooling headline inflation figures, overall consumer confidence remained relatively stable at -8 in August, down from -7 last month. By comparison, in August 2020 the overall index was at -27.

Compared to last month, two of the five measures used to calculate the overall index were up, two were down and one remains the same. 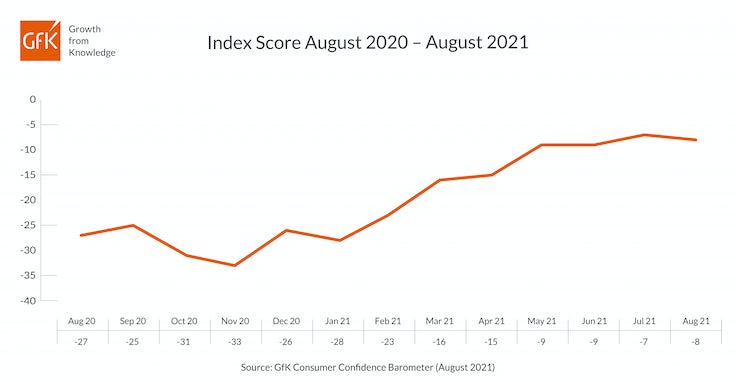 “We have recorded a tiny step back in consumer confidence this month with a one-point dip to -8 in the overall index score,” GfK client strategy director Joe Staton tells Marketing Week.

“The key difference in sentiment compared to last month is the sharp increase in the motivation to save, with this sub-measure moving up five points to +25.”

The five-point rise in the savings index this month balances out a five-point fall in the major purchase index, suggesting that consumers are now saving for the future rather than spending in the short term.

Staton, however, believes the difference in consumer confidence compared to this time last year is more striking.

“With the removal of most restrictions across the UK, it’s worth looking back for a reminder of just how gloomy people out on the high street were feeling this time last year,” he notes. 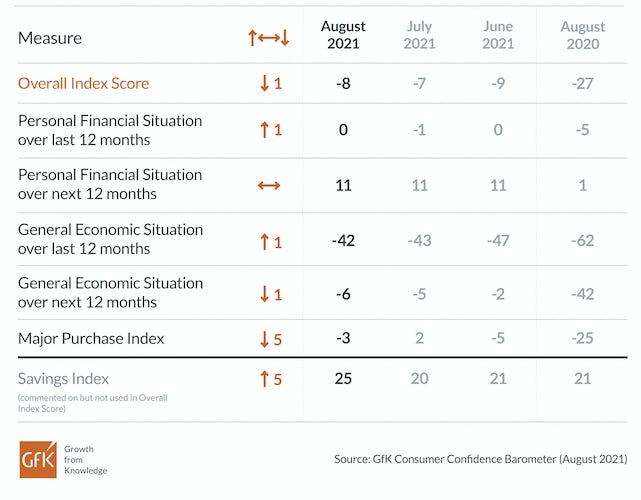 Taking the sub-measure on ‘general economy over the next 12 months’ as an example, in August 2020 this figure was down at -42, whereas this month the figure is much healthier at -6.

The measure of intentions to make major purchases was down at -25 last August, however this month the figure is a healthier -3.

“There’s no doubt that Covid numbers still have the power to deliver surprises as we move forward, but marketers can expect to see the consumer mood improving as time passes. It’s a much easier road ahead now,” Staton adds.

“With the economy continuing to open up and GDP bouncing back, the overall picture for the economic health of the nation is looking good for the remainder of 2021. There are compelling reasons here to be cheerful as we begin to put the hardest pandemic months behind us.”