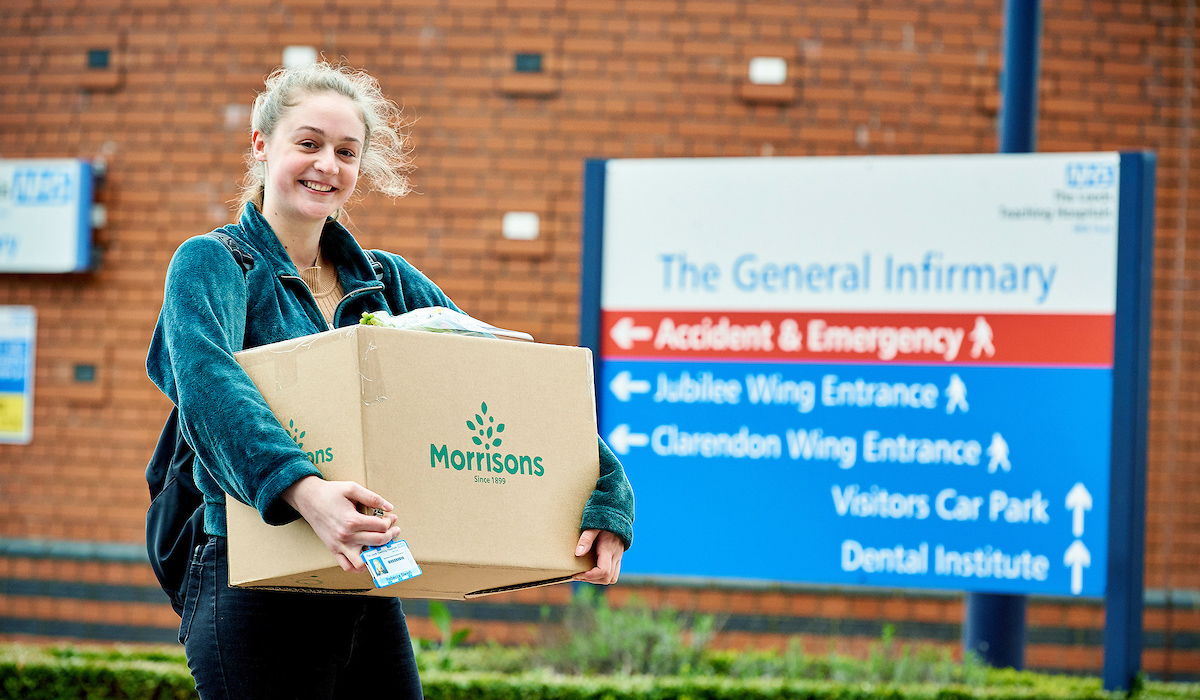 Morrisons is hoping it can “hit the ground running” as it looks to capitalise on sales growth during lockdown through a mixture of price cuts, online innovation and a strong British supply chain.

The supermarket believes it can cater to the “step change” in the online and ‘eat at home’ sectors to build market share, despite acknowledging customer confidence and behaviour will remain uncertain with a recession on the horizon.

“There so many imponderables it’s hard to call, but we know as a nation we’ll come out the other side,” said CEO David Potts, speaking on a press briefing this morning (10 September).

“We know value and price will prevail and I believe Morrisons will emerge stronger than before. New Morrisons hitting the ground running with a new future.”

With Asda committing £100m to cut prices ahead of Christmas and Tesco already pricing matching with Aldi, Potts is confident Morrisons will be able to differentiate its brand in a highly competitive market.

“We are vertically integrated and therefore this idea that 25% of the food we sell we make ourselves is actually true. That’s an important differentiating mark in the company’s trading offer. Clearly great value is crucial to us, we are a value supermarket business. Many of our customers are on a budget where the budget means a budget, it doesn’t mean spend what you like. We combine that with our very friendly colleagues who are fantastic, they’re the best part of the whole company,” Potts told Marketing Week.

“Whether it hits bull’s eye – and this morning’s numbers show we’re certainly on the dartboard – that’s going to be in the hands of consumers. When it comes to consumer behaviour and shopping around, if you develop a compelling customer offer and keep improving the shopping trip there’s no need to shop around.”

In the middle of a pandemic you reach for those things that consumers value and colleagues believe are the right things to do.

Morrisons is pushing for growth as it looks to become a “broader, stronger business”, having increased like-for-like sales by 8.7% year on year during the 26 weeks to 2 August.

Total revenue, excluding fuel, rose by 8.8% to £7.55bn, although the supermarket did incur costs £155m caused by the pandemic, cutting its pre-tax profit by 25%. Morrisons spent £31m on marketing and advertising, up marginally from the £30m spent during the same period in 2019.

The supermarket revealed on Monday it was slashing prices on 400 ‘essential products’ by an average of 23%, in addition to 800 prices already cut, which COO Trevor Strain explained were not considered short-term promotions.

“If you look back over the last 18 months we’ve made a series of moves around pricing where we’ve cut a number of items quite frequently on items that are most important to consumers, what we call customer favourites,” said Strain.

“We do that knowing that price stability is very important. If you look back over the price cuts that we executed through the first half last year, nearly all of those are still at the same price or lower. It’s our intent that we continue to become more competitive and that we achieve that and become stable around those prices, knowing full well as we head into tougher economic times that value is going to be vital.”

Morrisons has spent the past six months ramping up its online delivery capacity, which has increased fivefold via Morrisons.com, the launch of food boxes and a doorstep delivery service, as well as tie-ups with Amazon and Deliveroo.

Morrisons has also opened a Deliveroo ‘dark kitchen’ at its new look Market Kitchen store at Manchester Piccadilly Station. Delivering fresh food direct from the store, one or two more dark kitchens are set to be introduced before the financial year end.

“In Manchester we put in our first dark kitchen downstairs, which is a serious piece of kit, to provide a load more food to be fulfilled by Deliveroo to the local residents, offices and anybody who would like great value food from Morrisons,” said Potts.

“We need to see how that goes. We will do one or two more of those, but it’s a complementary strategy around the food needs of the country.”

The wider partnership with Deliveroo is now offering food delivery in 30 minutes served via more than 180 Morrisons stores, while the same-day delivery tie-up with Amazon now operates from 50 of the grocer’s stores nationwide.

In addition to this, shoppers in Leeds can now order their Morrisons shop directly from Amazon.co.uk, a trial which is expected to expand to millions of Amazon Prime members by the end of the year.

During this same period, Morrisons.com has also more than doubled its number of weekly home deliveries and now offers click-and-collect pick-up from almost 280 stores. Elsewhere, Morrisons has branched out with a doorstep delivery service and the creation of the Food Box Company, which offers customers a selection of food box options for delivery.

Initially intended for as a product for vulnerable people self-isolating during the lockdown, the supermarket has extended to a wider range including a curated box of British meat, a Ramadan selection and a £30 ‘Five Meals to Feed a Family of Four’ box.

Potts is confident that Morrisons is well-positioned to seize on any gaps in the market and believes having its own food manufacturing gives the supermarket an extra string to its bow.

“In the middle of a pandemic you reach for those things that consumers value and colleagues believe are the right things to do and this morning’s figures show we have done that in H1. Culturally it’s an important point and one of our key priorities is to become naturally digital, so it’s intuitive when you use Morrisons that things work and it saves you time and money,” said Potts.

Since lockdown commenced, the grocer has recruited more than 45,000 new and temporary staff and no employees were furloughed. The current headcount has swelled to 122,361 with an additional 26,000 employees, at least half of whom are permanent staff.

The supermarket has, however, cut 3,000 managerial roles and added 7,000 customer facing roles in a bid to bolster the in-store customer experience.

Morrisons is also pioneering a new way of working at its Bradford headquarters, reducing the number of senior roles and introducing “bigger, broader roles elsewhere”.

The office is now open six days a week and staff have moved to a four-day work pattern with “fewer bigger roles and more home working”. Employees are now required to work four days a week and every fourth week they work on a Saturday until around 2pm to help limit the number of people on site at any one time.

“[On Saturday] We were tackling issues that quite often you don’t get time to do during the normal week and the atmosphere has worked very well,” says Potts.

If you develop a compelling customer offer and keep improving the shopping trip there’s no need to shop around.

The Morrisons CEO is bullish about the business’ ability to capitalise on the “supermarket renaissance” precipitated by the Covid-19 pandemic, which he believes is evidenced by the return of the “big shop” over the past six months.

Data suggests Morrisons has been outperforming its ‘big four’ rivals since the onset of the pandemic. With sales growth of 15%, it was the best performing of the big four during the 12 weeks to 11 July, according to Nielsen. Likewise, in the 12 weeks to 9 August Kantar data showed Morrisons grew sales by 16%, driven by a particularly strong performance from its stores, which account for 10.2% of the market.

Buoyed by this success, Potts is already planning for a “very competitive Christmas”. Morrisons is pushing its price message, committing to ensure a basket of 451 of the most popular products will be less expensive than 2019. That being said, he is hopeful a Brexit deal can be achieved to take the pressure off the wider retail sector.

“Two-thirds of what we sell is British, so we’re in a particularly strong position. Of course, we can’t defy gravity and we would very much prefer on behalf of British consumers to have a deal which includes no tariffs both between mainland Europe and the UK,” Potts added.