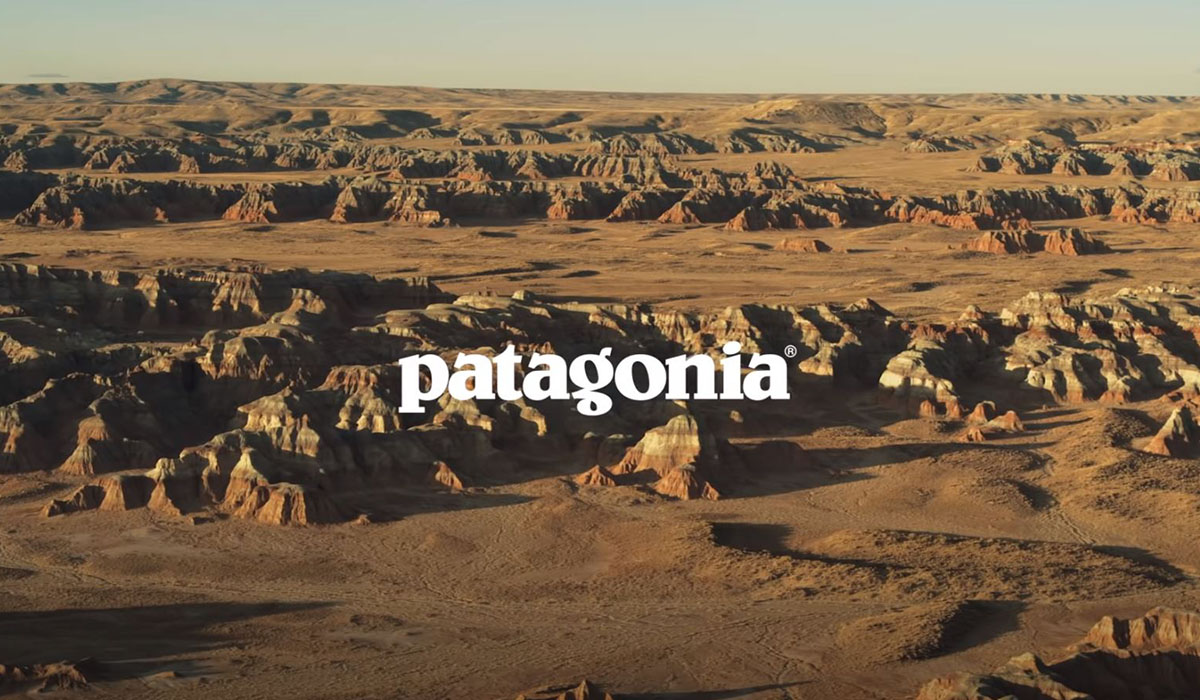 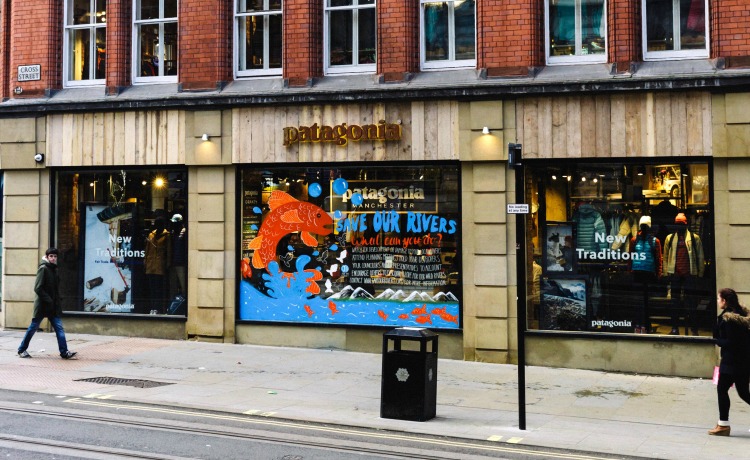 The world may be suffering from a global pandemic, the impending threats of a climate crisis and a tumultuous US presidential election, but Patagonia is not going to let 2020 dampen its “iconoclastic and countercultural energy”.

In recent weeks, eagle-eyed consumers buying a specific pair of shorts from the outdoor apparel brand’s latest range will have noticed a message stitched inside: ‘Vote the Arseholes Out’.

The message is not about voting out US president Donald Trump specifically, or even a strategically considered marketing exercise. Instead, it is a call to arms to remove all politicians from office who take money from fossil fuel interests and roll back environmental policy, explained Patagonia European marketing director, Alex Weller.

Speaking at the Festival of Marketing, Weller said the phrase is something company founder and owner, Yvon Chouinard, has been using for years. Just last year, he urged Patagonia’s ‘1% for the planet’ community of grassroots activists to ‘Vote the Arseholes Out’ in an open letter calling on them to mobilise the vote in defence of the planet.

Weller explained that the business has the “track record and muscle memory” to make quick decisions like this, with the product team deciding to add the message to one product – the ‘stand up shorts’ – as a challenge to stand up to climate deniers. The decision was taken so quickly that Weller found out first on social.

“I heard about that when I first saw it on social media, as did a lot of people in the company, and how we as marketers in Europe react to that moment when a lot of energy gets created – we’re quite used to that,” he said.

“There are things that come with real plans and forethought, and there are things that happen in the moment that we’re also reacting to internally within the company, which is pretty special for a company of our size to still have that instinct to just do things on the fly that feel right.”

We don’t work with influencers, we don’t do fashion-led advertising, we don’t put any advertising in fashion magazines.

Weller, and the Patagonia team at large, are keen not to let attention on the climate crisis be suppressed by the Covid-19 pandemic. He argued that while marketers, much like politicians, are good at sounding sympathetic to these issues, without meaningful action this is all just talk. For this reason, “unprecedented levels of collaboration and action” are required.

“There isn’t an action we take as a business or a decision that doesn’t have action at its heart and when we think about engaging with our customer communities, the pathways to action to create meaningful change are the most important part of what we do,” said Weller.

He acknowledged that Patagonia cannot solve every issue, describing the company as a “mosquito in the room” in relation to the size of the global economy. However, the company takes its mosquito-status “very seriously” and seeks to use its platform to agitate for new ways of doing business.

All employees are, for example, encouraged to support direct action. Present at last year’s Extinction Rebellion protests in Amsterdam were Patagonia’s European general manager, sales director and ecommerce director. Not only are the team trained in how to engage in civil disobedience, there is also a fund within the company for bail processes and legal support – resources Weller described as “incredibly emboldening”.

Patagonia on why brands ‘can’t reverse into purpose’ through marketing

The whole approach of the business ladders up to Patagonia’s mission, which was turbocharged by Chouinard two years ago. Challenging the company to radically rethink how it approaches business, the Patagonia founder changed the mission statement overnight to read: ‘We’re in business to save our home planet’.

“It was quite an intimidating time for many of us who’d worked in the company for a while, and felt like we knew what our mission and purpose was, to have such a bold set of words put above our front door and a task from the owner of the company to live up to this very ambitious statement,” Weller reflected.

“Our anxiety around this was transformed into an energy and an energy we felt was much needed, because of course we all understand the reality of where we sit right now, not just as business people and marketers, but as human beings and the reality that we are in the middle of a rapidly accelerating and incredibly worrying climate and ecological crisis.”

The business operates according to four pillars, which guide its approach to everything from the supply chain to supporting a global shift away from fossil fuels.

The first pillar is focused on Patagonia’s own footprint and meeting the goal to become carbon neutral by 2025. That means taking ownership of the company’s carbon impact all the way down to the mills where its fabrics are made and taking responsibility for the carbon emissions of its partners in the supply chain.

As an outdoor apparel company, Patagonia is focused on protecting public lands from the threat posed by corporations and “nefarious partnerships between political and corporate interests”. The brand is also an advocate for the role of regenerative agriculture as a climate solution, including investing in new agri-tech for harvesting the fibres for its clothes.

Lastly, the company is focused on supporting the “energy revolution” and the transition away from fossil fuel-based energy.

These priorities play out in different ways, perhaps most prominently through 1% for the planet, Patagonia’s commitment to donate 1% of its pre-tax profit globally to more than 1,000 grassroots environmental organisations and charities, including 160 in Europe.

Back in 2016, the company decided to shake up the annual Black Friday sales event by donating 100% of sales generated on the day to the 1% for the planet community.

Through the ‘100% for the planet’ commitment – an idea dreamt up by a junior graphic designer in the digital team – Patagonia ended up smashing its $2.5m target by generating $10m worth of sales in a single day. The Black Friday event doubled the amount the company gave to its grantees in 2016, taking the total donated to $20m.

Then last year the company launched the Patagonia Action Works platform, which enables customers to find groups they can join in their local areas, as well as gain support with petitions, learn volunteering skills and attend events.

“This platform is full of actions that are geo-located and it’s a really powerful community. It also means we as a business can get out of the way and stop being a bottleneck between our customer community and the grantee community we work with,” Weller explained.

He wants Patagonia to continue to use its wider brand platform to “celebrate and elevate the work of climate activists”, as it did during last September’s Youth Climate Strikes. The brand ran a campaign called ‘Facing Extinction’, celebrating a series of youth activists from across the world with print adverts in the Evening Standard and mural on a building in Berlin.

Over the past two years, Patagonia has also developed feature length films to draw attention to the “micro-assaults” being carried out on the earth’s ecosystem.

These include Blue Heart, which exposed how Europe’s last free flowing rivers in the Balkan Peninsula were under threat from the huge expansion of hydro-power dam construction. The film encouraged viewers to lobby the European Bank for Reconstruction and Development to change course on its funding.

Blue Heart was followed by Artifishal, a film revealing the impact of fish farming on wild salmon stocks across Europe, and this week will see the launch of Public Trust, a film about the assault on American public lands by “predominantly Republican politicians and corporate partnerships”.

‘We’re not an exclusive club’

With a mission to save the planet and activity constantly in play to draw attention to the climate crisis, Patagonia is also well aware that it must not lose sight of the need to run a sustainable and profitable business.

“That means we have to do a good job of selling products and balancing the books, and if we do a really good job of that it gives us the resource and the momentum to make the impact that we want to make in the world, to show up as a force for good and continue to challenge ourselves to push our mission forward as relates to environmental impact and social justice.”

He insisted that Patagonia is not “an exclusive club” only for people who are passionate about outdoor sports or have credentials in environmental activism. The company is focused on making great products and bringing them to life in a “thoughtful way”, mitigating as much as possible the product’s impact on the environment. However, Patagonia is aware that it cannot control the message in its entirety.

“There is a bit of a long-tail to the product and certain people will still choose to buy our product for fashion, that’s a reality. It’s not something we try to actively avoid, but it is not something we try to fuel. We don’t work with influencers, we don’t do fashion-led advertising, we don’t put any advertising in fashion magazines,” said Weller.

“We don’t pay to fuel a superficial desire for our products in any way. In fact, when we do have the opportunity to amplify our point of view on product, we typically talk about the reasons why you should question buying things, not actually choose to buy things. It’s not a straightforward response to something that’s not a straightforward dynamic.”

Weller was also clear that Patagonia is not an exclusive club when it comes to selecting new talent and that the company recruits for technical expertise, as well as “culture add” people.

“We know that everybody’s on a journey and some people are enlightened or intrigued about how they can do more in relation to environmental impact and some people are further on that journey, but we’re certainly not exclusive. We’re not saying, ‘No you can’t come in if you haven’t met that criteria’,” he added.

Weller is certain that society is in flux and every business will need to change – whether that change is being driven by customers, legislation or from a desire within the organisation. Brands, he said, will be forced to address their environmental impact and how they show up in the world as a force for good.

“At some point this will no longer be an option for businesses that want to be viable, so use your voice within your business as a marketer,” Weller urged.

“As a marketer what we do is convince, we tell stories, we mobilise people towards great ideas and if you care that much, I would suggest focus that energy on trying to make that internal change.”